This guide to the basics of gas barbecues will cover preheating, cooking and the temperatures required for different meats.

If you're not a vegetarian, most people in the United Kingdom have come to love a BBQ. As soon as there is a hint of sunshine, especially in the run-up to a bank holiday weekend, local garden centres will be busy with people looking for a barbecue or an upgrade for their current model.

As soon as the weekend arrives every supermarket will be overrun with happy people in their summer wear and sunglasses stocking up on supplies for their weekend BBQ along with sun lotion and cheap fizzy lager. 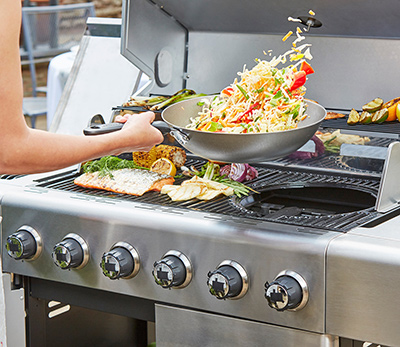 Coal, Wood or Gas Barbecues, Which is Better?

So first things first, are traditionally fuelled BBQs such as wood or coal better than gas? Do they produce a better taste? This is a common discussion with many people believing that only coals produce the real 'barbecue taste'

The experts don’t think so and neither do I, the way that barbecues work means that the flavour will be the same no matter what fuel is used because of a simple three-step process: when food cooks on the open grill, the juices fall onto vapourisers or coals below and then they will be burned or evaporate sending a flavour-filled vapour back up to the food giving it a great taste. It isn’t the fuel that gives you the flavour it’s the vapourizing of the cooking juices.

If your barbecue has no hood then turn all burners onto high for approximately 10 minutes, once the temperature is at the desired level, reduce the burner settings. For a barbecue with a hood, turn the two outside burners onto high and leave it for 8 minutes with the hood closed,  once the temperature reaches the desired level turn the burners down.

I must take this opportunity to say that I advise you never to leave your BBQ unattended for safety reasons. If it’s cold or windy then the times above should be extended.

There are two ways you can cook on a barbecue, direct or indirect cooking. Direct cooking is where the heat is directly under the food being cooked. 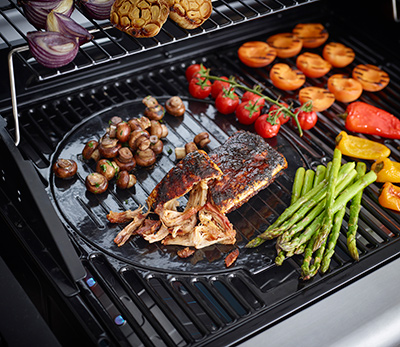 Direct Cooking on the Griddle

When direct cooking foods with plenty of fat content you should use the griddle, this method is for foods normally cooked in a frying pan such as bacon, thin steaks, fish fillets and tomatoes.

To help foods retain their natural juices and a great flavour, you are best to cook them slowly on a moderate to medium heat. If the heat is too high, the food could be burnt on the outside but raw inside. If you cook with a hood which is down then the burners can be left on a lower heat.

Direct Cooking on the Grill

This is the most common way that Australians barbecue their meat, it retains the true barbecue taste and flavour. Usually thinner cuts of meat and fish that cook quickly are successfully done this way, thicker cuts can be cooked using this method mixed with an indirect method.

Lightly oil the grill before lighting your gas BBQ. Then after preheating, once it is hot, place the food directly onto the grill to quickly sear and seal in the flavour and juices.

You can only indirect cook if you have a roasting hood, this is because there is no direct heat under the food, rather it cooks by the heat circulating around it. It is similar to a conventional oven and is ideal for roasts, vegetables and whole fish.

Indirect cooking is also great for thick cuts of meat and a combination of both indirect and direct cooking will give you the best flavour and texture.

The safest way to test that meat is cooked is by using a meat thermometer. Below is a list of meats and the temperatures they should be when cooked at different levels. For the best reading always insert the thermometer into the thickest part of the meat and make sure that it doesn’t touch any bones.

Leave the Meat to Rest

When you cook the meat the juices are forced towards the centre of it, when you turn it over the same happens again, this gives the middle of the meat plenty of juice. Cutting it straight away means all of those juices run out and onto your cutting surface and the flavour is lost, so leave the Meat to Rest

By leaving the meat to rest this allows the juices to slowly make their way back to the out edges of the meat giving you an overall juicy, flavourful taste.

If you are looking to buy a new BBQ, you can view a wide range of Gas Barbecues we sell