All About Haddonstone Planters

The stone planters from Haddonstone encompasses classical, traditional and contemporary designs, all made to the same high standard with an emphasis on quality.

Following the fashions of ancient Greece to Victorian times, Haddonstone planters are suitable for gardens, conservatories and patios, and range from the highly ornate to elegantly understated pieces that are all superbly reproduced by expert craftsmen. 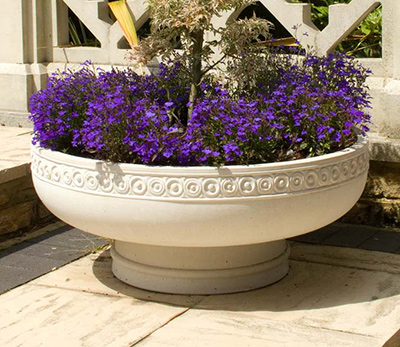 The circular Plaited Basket Planter is the perfect shape and size for any terrace or patio, as are the Herb and Flowered Basket planters, the latter featuring pretty haut-relief decoration. These contrast noticeably with the Gothic styles with leaf and ribbon moulding together with interlaced strapwork.

Maidford and Marlborough are fine examples of elegant cast stone bowls while the Byzantine Bowl Planter is much more stylised with mythical creatures amidst a very ornate design. A twelve sided Kensington bowl will have a completely different effect on the landscape than the Olympian bowl that, although inspired by ancient Greece will not look out of place in a contemporary environment. 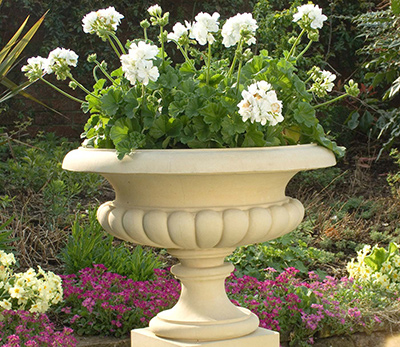 There's a huge choice from the uncomplicated Belton design through to the rather elaborate Victorian Trough and Support and onto the imposing Venetian and Adam Trough planters with their ostentatious embellishment. Along the way, there's the naturalistic Alpine and eastern inspired Arabesque styles.

For urns you can choose between the statuesque and finely decorated Vine, the more rotund Ascott and Regency or the smoothly classical Olympian Urn. There's the contrasting Gothic and Florentine styles and many with traditional gadrooning including one based on a marble original at the Italianate chateau of Fontainebleau. 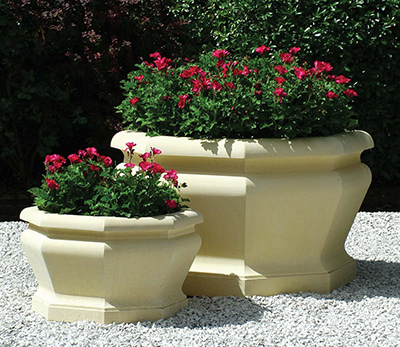 There is a Haddonstone vase to enhance any type of landscape. Simple elegance is exemplified by the Etruscan style and classic English design by the Sheraton and Shugborough vases. Far more elaborate is the floral Versailles Vase and the stunning fluted Winslow Vase. At opposite ends of the design spectrum are a functional Roman Vase and the rather grand Versailles vases.

Sure to make an impression is the Andalos Jardiniere that's twelve sided with Arabesque decoration. The Corredo is also hugely ornate inspired by a 16th century original, while the unobtrusive Elizabethan and Tudor designs feature attractive basketwork. The Ionian is another notable classical piece, so different to the mainly plain but shapely Roman and Scrolled jardinieres. 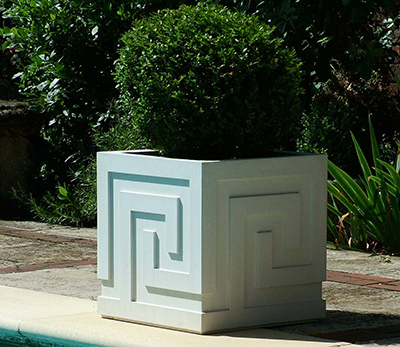 This selection features containers of many profiles and sizes combining traditional craftsmanship with modern themes and presenting classical shapes as completely appropriate in a modern environment.

The Cube collection is made up of strikingly modern designs that incorporate many different influences as diverse as Grecian motifs and Inca Pyramids. There are others that resemble in a totally fascinating way a jigsaw puzzle and another based on, rather intriguingly, block paving. Manufactured from TecLite, these cubes are much lighter and have a different feel to other cast stone.

Other planters benefiting from confident angular lines are the Meander Stone Planter, the stylishly ribbed Chalice and the Arc Planter that is art deco inspired in the same way as the Sunburst Stone Planter.

Based on a popular 1970s design, the Hoop Planter has handsome lines and shapely proportions, that is a fine example of how a simple form can be so striking, in the same way as the Compton Bowl.

The Bay, Crucible and Octagonal planters rely on their eye catching elegant shapes rather than decoration to make an impact. The Flute Stone Planter is another one that impresses with a hugely attractive shape rather than intricate decoration. Possibly the best example of this is the Highland Park planter that has a wide rim, slim bowl and solid four legs. 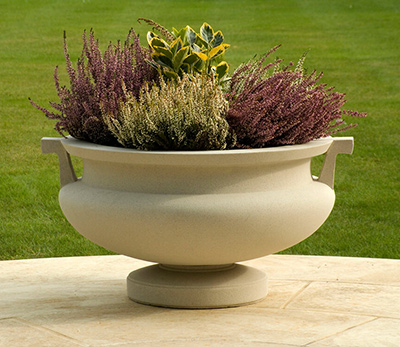 Although taking their lead from classical designs, the Robert A.M. Stern Collection is a stunning group of planters that can be perfectly at home inside the home or on a terrace. Evoking ancient Greece, the Olympian bowls, urns, vases and planters together with their Athenian counter parts are thoroughly contemporary with their clean, smooth and sophisticated lines.

The Roman Jardiniere has distinctly graceful contours, while the Vase is slim at its base and then expands like an upturned triangle interrupted by just a single rib. Both come in two sizes. The Romanesque Bowl is completely different, very wide and expansive but low on the ground with a delicate rim decoration.