How to Create a Victorian Garden

During the Victorian era, plants and seeds arrived from all over the globe, and structures made from cast stone and wrought iron enhanced the most modest property.

The number of people who had a garden was on the increase and more leisure time meant that these people were spending greater time in the garden. New inventions such as the lawnmower began to have a tremendous impact on garden design and, with increased horticultural knowledge, gardeners learnt how to control nature as well as working with it.

Neatly manicured lawns with gazebos for entertaining and well-stocked exuberant borders that painted a picture were the order of the day with ornate planting schemes that would include many seasonal plants in geometric patterns, together with summer bedding behind a neatly snipped box. The path and edging would be terracotta tiling leading to a doorway bordered with climbers.

With the importation of more exotic plants and an increasingly ostentatious approach, gardening was all about the show not harmonising with nature. It wasn't until the late 19th century that more naturalistic planting once again became fashionable.

Trawling the world for the bright and beautiful, the Victorian garden would be filled with hollyhocks – tall with spikes of rosette blooms, snapdragons, asters, chrysanthemums, yellow and red calceolarias, marigolds, pansies, violas, hyacinths, lilies, irises, sweet peas and red hot pokers. In essence, showy, vibrant flowers full of colour with a touch of the exotic.

Advances in science resulted in the hybridization of plants and the introduction of new cultivars, and the rose was one of the main beneficiaries.

No other bloom signifies romance more than a rose and large scented decorative white, pink or red blooms would be everywhere. There is no more suitable plant for your Victorian garden than a hybrid perpetual rose which is repeat flowering and features large fragrant blooms. Among the most popular and still available today are the red Countess of Oxford, introduced in 1869, crimson Empereur du Maroc (1858), white Gloire Lyonaisse (1885) and pink Lady Stuart (1851). 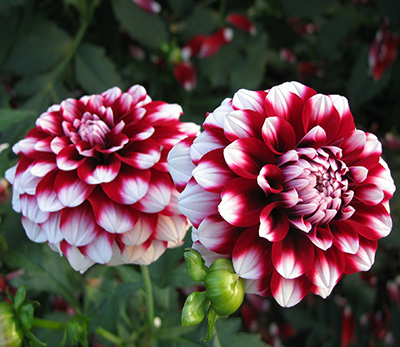 Climbing and rambling roses decorated arches and other structures to spectacular romantic effect. With the surge of ardour in a secluded arbour with the air permeated with heady scent, the Victorian lady might have been fortunate to escape with her virtue intact.

Dahlias were another popular plant with over 500 cultivars. You can understand why, with their vibrant colours and showy disposition. Dahlias should be part of the picture, as there were hundreds of varieties during Victoria's reign but of those only a handful of the originals survive: 'White Aster' (1879), the orange red 'Kaiser Wilhelm' (1881), 'Union Jack' (1882) and 'Tommy Keith' (1892) which are red and white, and the pink 'Stolz von Berlin' (1884) and Nellie Broomhead (1897).

Shrubs, the bolder the better, including acid-loving azaleas, spring-flowering camelias, hardy cotoneasters, forsythias, versatile fushias, hydrangeas, magnolias, skimmias with winter berries, and easy to grow viburnums were gathered from all over the world and found their place in a Victorian garden. For an iconic tree, why not choose a Monkey Puzzle that became available in the 1840s. 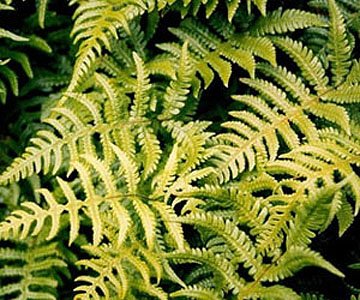 A young lady might choose to lead her escort along a woodland path dappled with shade. In the springtime, there would be a carpet of scented English bluebells together with primroses, foxgloves and wild violets. Ferns were also tremendously popular with the Victorians, expeditions set off in all directions to collect new varieties resulting in the near extinction of some native species.

Heritage fruit trees could include an Egremont Russet apple (1872) or the heavy cropping Newton Wonder.(1887) which can be used to cook or eat. If you fancy a pear tree, the excellently flavoured Triomphe De Vienne has been growing vigorously since 1864.

If you need inspiration, visit Biddulph Grange in Staffordshire bought by plant collector James Bateman in 1840, this has separate gardens devoted to plants from different parts of the world while Hughenden Manor in Buckinghamshire has a more formal but no less colourful garden created by Benjamin Disraeli's wife.

Standen in Sussex is one of the best examples of late Victorian design heavily influenced by the arts and crafts movement, while Rowallane in Northern Ireland was laid out in the mid-19th century and contains both formal and natural elements. Peckover House in Cambridge is much smaller but no less interesting with a townhouse garden, many specimen trees and shrubs, fernery and a croquet lawn. 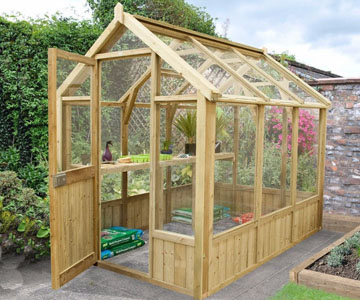 Victorians were particularly keen on ferns and collecting expeditions set off in all directions. There was even a name for the addiction, Pteridomania or Fern-Fever resulting in the near extinction of some native species.

Impressive Victorian glasshouses and ferneries were built to house tender specimens and grow other exotic plants such as pineapples. The most famous example is the Palm House at Kew Gardens that was built during the 1840s, Victorian engineering expertise utilizing wrought iron made possible the construction of large glasshouses in botanic gardens, public parks and on estates throughout the country, including National Trust properties at Cragside in Northumberland, Peckover House in Cambridgeshire and Sunnycroft in Shropshire.

Victorian greenhouses are characterized by a steep roof pitch for maximum light transmission and to create headroom for palms and other tall plants. Glass panels tend to be narrower than those used in modern greenhouses and period features such as cresting and finials abound.

Although built from high-quality timber rather than iron, contemporary greenhouses such as the Forest Vale Victorian range reflect this styling with high ridges and long panes of toughened glass. There's also the Victorian wall greenhouse a lovely sun-filled structure for planting and potting. 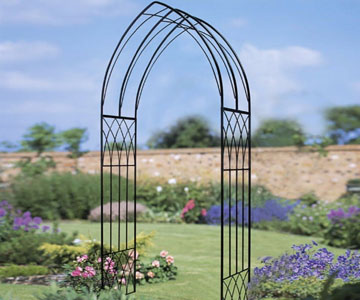 Wrought iron also made possible garden features such as arches to support roses honeysuckle, clematis and other climbers. The Wrenbury metal arches from Rowlinson are a modern-day equivalent, there's also the York and Abbey rose arches from Burbage, and the Huntingdon Ornamental Arch that comes with planters. All these benefit from a protective powder coating, and the arches will add structure and height while enhancing your garden with Victorian style.

Garden fencing made from wrought iron became increasingly popular due the Victorian era due to the fact that it is a malleable material that can be fashioned very ornately and corrosion-resistant. Now replaced by powder coated mild steel, metal garden arches by Burbage keeps up the tradition of decorative railings by manufacturing ornate ready-made and bespoke fencing and gates.

To illuminate your Victorian garden there can't be anything more suitable than a gas lamp style lamppost. Made from excellent quality aluminium which has a black and gold finish, it has tremendous detail and the fluted stem is topped with an opaque glazed lamp holder. 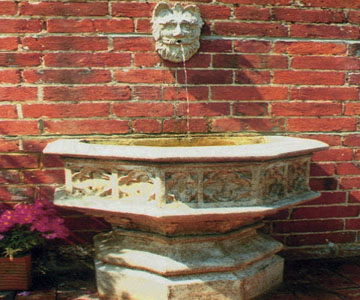 Ornaments were important to add structure and interest to the Victorian garden, birdbaths, sundial, statues, urns – these can be placed surreptitiously, a bust gazing imperiously at passers-by, or as a focal point at the far end of a pergola or in the middle of a lawn. A great starting point has to be the Hazelwood Stone Bird Bath a Victorian-style classic to set the scene.

Modern cast stone ornaments from original designs are ideal and very affordable adornments. To reflect the romantic mood a scantily clad maiden or goddess might be appropriate, or two lovers embracing.

Again, particularly if gathered from some exotic far off land, many trees were highly valued, none more so than the Monkey Puzzle which became commercially available in the 1840s. Fruit trees also became fashionable, choose the excellently flavoured Triomphe De Vienne pear that has been growing vigorously since 1864 or Josephine de Malines.

Be careful though, biting into a sweet and juicy Egremont Russet might give any fit young man ideas of foraging for further forbidden fruit.

Ever since Coade stone was formulated in the late 18th century, affordable cast stone ornaments have decorated our gardens, and the Victorians took full advantage of any new technology.

Companies such as Haddonstone, Chilstone and Borderstone now reference or reproduce Victorian designs, these items are so convincing that they have been used to replace damaged stone ornaments from stately homes because they are the same quality as the originals, just as hardwearing, and will develop the same attractive patina.

Bird baths, a sundial, statues, urns and pedestals placed surreptitiously or as a focal point were important to add structure and interest while Haddonstone's Gothic Fountain and Borderstone's Two Tier Cherub Fountain are elegant examples of similar water features that would introduce movement and sound into a Victorian garden.