How To Deal With Garden Slugs

Slugs are probably our most common garden pest, they destroy our plants and, except for providing a food source for birds and other welcome garden visitors such as frogs and hedgehogs, they seem to have no redeeming features. Here are some tips on how to keep them under control.

Slow witted and sluggish with seemingly no redeeming qualities, slugs are unloved creatures with fewer friends than black rats. Wood lice and cockroaches are their probable cell mates and partners in crime.

Among the seven common accused species are ‘Arion ater’ alias the Large Black Slug; ‘Derocerus reticulatum’ aka the Field Slug; ‘Arion hortensis’ who goes by the name of the Garden Slug; and their accomplice ‘Tandonia budapestensis’ or the Keeled Slug. 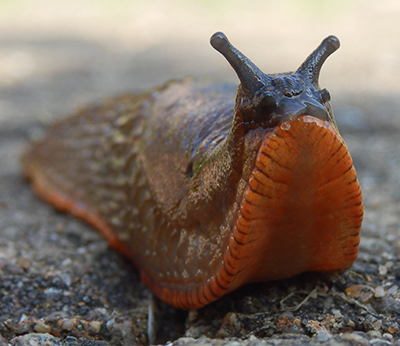 None of them would win a beauty contest and they are charged with entering your garden at night and using their serrated tongue to eat their way through your most prized plants. Hostas, delphiniums, dahlias and sweet peas are all regular victims.

The evidence is undeniable, the tell tale slime trail – you don’t have to be Inspector Morse for this gooey deposit to lead you to the scene of the crime where seedlings have disappeared, tender plants have only their tougher stems remaining and vegetables have been cut down in the prime, never having had the chance to mature into a salad.

Not only favouring the cover of darkness to commit crimes against your greenery, some slugs also live and feed underground, hollowing out potatoes so all there is left is a empty skin and then they turn their attention to your bulbs.

Have they any redeeming features?

The case for the prosecution might be a strong one and the slug may be guilty as charged but their defence could put forward a compelling case for mercy.

The fact that they are a good source of protein for predators such as birds, frogs, hedgehogs and foxes is of little comfort to the slug, but it does result in garden bio-diversity. Encourage these predators and they will also feed on other pests.

Slugs do a fine job in breaking down organic matter, something that doesn’t result in their demise and is very useful in the garden. They will eat all kinds of decaying matter, composting it and  releasing valuable nutrients back into the soil.

Although in no way excusing their behaviour, don’t forget that gastropods have been around for millions of years, long before anyone thought that having a garden full of tasty plants was a good idea.

They have evolved into sturdy animals that can withstand extremes of weather. The slime acts as both a lubricant for movement, as a protection against dehydration and an aid to hanging onto slippery surfaces. It also plays a role in reproduction but as a family blog we’ll move swiftly on to the fact that its rather unpleasant taste may also puts off predators.

The defence might also plead that prevention is better than a cure and that gardeners should protect their plants instead of laying them out like a horticultural smörgåsbord.

Accepting that some damage is inevitable, the organic gardener, rather than despatching all slugs to their maker, seeks to control their numbers and, through various methods, protect their plants.

Choose plants that are bred to have resistance to slugs. Desiree potatoes are, just as an example, said to be desired less by slugs than humans. The tactic of not growing vulnerable plants such as hostas will disappoint lovers of their superb foliage but there are a raft of other plants that, after initial protection perhaps from a cut off plastic pop bottle acting as a cloche, will stand up to slugs.

Encourage predators by putting out bird food and digging a pond for frogs. Cultivate the soil so that eggs are disturbed for birds to feed on – this also lets the earth dry out, so making it unattractive to slugs.

The list of material that can be placed around a plant to discourage slugs is long and varied. Coffee granules, soot, sharp grit and copper rings are just a few. Another method is to actually attract slugs with temporary shelter, half an orange or grapefruit are favourites, then you can despatch the gathered masses.

All these methods are known to work, and I haven’t even mentioned beer traps, bran and comfrey leaves yet.

Two control techniques that have killer credentials from the scientific community rather than old wives, are the use of nemotodes and ferric phosphate pellets.

The former are present in the soil already but are not numerous enough to have much impact on the slug population. When watered into the soil in large numbers they can have a significant effect. Entering the slug’s body, these microscopic organisms bring with them bacteria to fatally infect it.

Nemotodes are available from garden centres and by mail order.

Ferric phosphate, as used in Bayer’s rainproof Organic Slug Bait, is a relatively new active ingredient for use in the battle against slugs, causing them to stop feeding. Other creatures, even those that subsequently eat the slug, are not affected. Eventually breaking down in the soil, the iron and phosphate will be used as a nutrient by adjacent plants.