How to Grow Potatoes

Potatoes may not be exciting, but they're easy to grow and can be cooked in different ways. The potato could be our most valuable vegetable.

Potatoes are easy to grow but, to prevent the spread of disease, always buy certified seed potatoes, don't think about planting old ones that you find sprouting at the bottom of your vegetable rack.

Decide whether you want 'Earlies' (first or second) or 'Maincrop'. 'First Earlies' are harvested in early to mid-summer, 'Second Earlies' in mid – late summer, while Maincrop potatoes are dug in late summer and autumn.

When the seed potatoes arrive, put them in egg boxes and place in well lit cool position. They will soon start to sprout. If there is not enough light these will be weak and leggy sprouts - what you need are strong, short, bushy green ones. 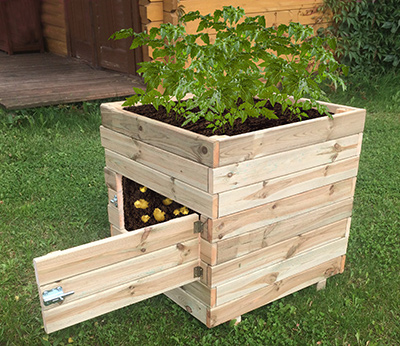 To grow seed potatoes successfully set the seed out in a light frost free room to allow the shoots to sprout. They will be ready for planting when the strongest shoots are 1-2 inches long.

For a better harvest dig in well rotted organic matter before planting the tubers and, to prevent disease, do not grow potatoes on the same patch in consecutive years.

An alternative growing method if you don't have enough room for a vegetable patch, and potatoes do take up a fair amount of space, is to use old car tyres.

Start with a couple of tyres filled with compost and garden soil. Place two seed potatoes on top and cover with more compost. Keep well watered and as the shoots emerge, add more compost and further tyres until the potatoes are ready to harvest.

If any shoots emerge when frost is still expected, cover them up with soil. During the growing season 'earth up' the plants so that the tubers are not exposed to the light and just the tips of the shoots are showing. This also helps to control weeds.

Another way is to buy a Gardman growbag made from heavy duty polypropylene with access flaps for harvesting. 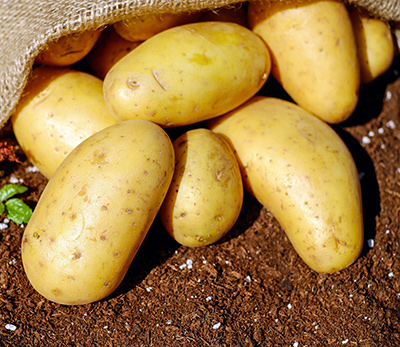 After harvesting, dry, blemish free maincrop potatoes can be stored in hessian sacks in a dark cool environment. I put mine up in the loft.

Romano is one of the newer varieties of seed potatoes to look for that is making an impact on our palates. It's a red skinned variety of early potato that is an excellent baker. It is set to oust the ever popular Desiree as the best red, maybe?

Wilja is a second early crop potato which was introduced from Holland in 1972, with a characteristic yellow Dutch flesh. Wilja established itself because it is so clean and adaptable to use.

Of course the older varieties are still in great demand, particularly King Edward and the ever popular Maris Piper. Both of these main crop varieties exhibit a creamy white flesh and floury texture. Use either of them boiled, mashed, baked, roasted, sautéed or chipped and you will get first class results.

They can be used even in salads but Arran Pilot or Home Guard will give better results. These, and most other early varieties are rich in Vitamin C. Dig them out of the garden and serve them on the table the same day to enjoy them at their delicious best.