How Can I Help To Save Our Bees?

Every gardener must have noticed a decline in the bee population over recent years. Intensive farming that demands the use of toxic chemicals, climate change and parasite infestation have all been put forward as potential causes, it's a worrying trend but one that we can all help to reverse.

Written by Lauren Bilboe -
Published on Thursday, 22nd of March, 2018.

Repeated studies, reported in respected journals such as Science and New Scientist have shown that a toxic cocktail of pesticides, herbicides and fungicides, is perhaps the greatest threat to the bee population, most notably the use of neonicotinoids.

Should We Be Concerned About The Bee Population Decline?

Without bees food production would collapse, as it is estimated that at least one third of all the crops that we grow depend on bees and other insects for their pollination.

They are a vital element in our eco-system, as hand pollination is impractical and prohibitively expensive. According to The Guardian, producers of Gala apples are now having to spend £5.7m each year replacing natural pollinators.

Leading expert Prof. Dave Goulson of Sussex University reasons that the collapse in bee and insect numbers reflects the fact that pesticides and mono-culture are making land inhospitable to most forms of life.

'We are currently on course for ecological Armageddon as entire landscapes all over the world are now permeated with highly potent neurotoxins, undoubtedly contributing to the global collapse of biodiversity.'

How Do Bees Pollinate?

In simple terms this is achieved by the bee collecting pollen on their body from the ‘male’ part of the flower (the anther) and depositing it on the female part (stigma). Some plants can self- pollinate while others need cross pollination, hence the importance of bees buzzing from one plant to another.

Pollen is deliberately collected, or attaches to the bee’s body when they are drinking nectar. The pollen is then stored in ‘pollen baskets’ to be transported home. However some bees ‘buzz pollinate’ by vibrating the flower with their flight muscles to dislodge the pollen. Other species bite into the flower to get at the pollen.

Pollination isn’t an altruistic activity, it’s incidental to the bee collecting the pollen and nectar to feed its larvae. The process benefits the plant by enabling reproduction and the bee has food to take back to the nest, the nectar provides carbohydrates and the pollen is full of protein.

Bees will visit your garden from quite some distance away. They will frequently fly up to four miles from their colony and will travel as far as it takes to collect sufficient pollen. One jar of honey may take ten million foraging journeys.

Bees also have a tendency to visit the same places every day as long as pollen is still available. You might wonder why they choose particular plants. It seems that bees know, probably by scent, when another bee has recently visited a flower and they will then ignore that plant.

Neonicotinoids are a family of systemic pesticides that infiltrate the whole structure of a plant including its pollen and nectar. There five main types of neonicotinoid – thiacloprid, acetamiprid, imidacloprid, clothianidin and thiamethoxam – all are extremely toxic and, after being ingested, attack the bees' nervous system.

Neonicotinoids do not immediately kill the bee, studies including one by the Centre for Ecology and Hydrology have found that bees will die at a younger age, their colonies were more likely not to have an egg laying queen and were at greater risk of infection and disease. The colony's ability to overwinter may well also be affected.

Neonicotinoids are used mainly as a treatment for seeds. Only a fraction is absorbed by the plant, the rest remains in the soil, contaminating crops for years to come. The neonicotinoids will also seep into water courses which means that the contamination spreads further to wild flowers and further afield.

Research from the Soil Association has also shown that the toxic nature of neonicotinoids may be increased by a thousand fold by the presence of up to a dozen different pesticides, fungicides and insecticides found in the bee population.

Only a small amount of research has taken place but continued exposure may well pose a health risk according to the National Resources Defense Council in the United States, and food for thought has been provided by the Centre for Ecology and Hydrology whose on-going research has discovered neonicotinoids in 25% of British honey.

Have Neonicotinoids Been Banned?

As there is now a considerable amount of evidence that indicates the risk that they pose to the environment, the UK backed the EU in imposing a near complete ban on the use of neonicontinoids in 2018.

The Environment Secretary, Michael Gove is quoted as saying,'Bees play a key part in our £100bn food industry, this justifies further restrictions on their (neonicotinoids) use. We cannot afford to put our pollinator populations at risk.'

What Are The Best Plants To Attract Bees?

Plants that have single open flowers will attract bees as access to plants with multiple petals can be difficult for pollinators and they may lack pollen and nectar. Traditional ‘cottage garden’ type flowers are best, as many modern flowers are bred purely for decoration and offer the bees little in the way of pollen and nectar.

Old favourites such as lupins, hollyhocks, honeysuckle, foxgloves, and aquilegia are ideal, together with herbs including marjoram, rosemary, thyme, sage and borage.  Sweet william, hyssop, jasmine and English lavender are all recommended by the Royal Horticultural Society along with many others and there are several specialist retailers from whom they can be purchased.

Grow a wide variety of plants throughout the year, you should ensure that there is a range of plants from crocus, daffodils and wallflowers that flower when food is scarce in the spring to cornflowers and lavender in the summer, dahlias and ivy in the autumn and black hellebore, and snowdrops during the winter.

If you want a lawn, allow dandelions to flourish along with white and red clover. Better still, why not establish a wild flower meadow that can be grown from seed or laid using a Meadow Mat which resembles normal turf but contains wild flowers known to attract bees and other pollinators.

97% of Britain’s flower meadows have been lost since 1945, so leave a sunny patch for thistles, grasses and wild flowers such as red clover, common knapweed and bird’s-foot trefoil to colonise. The area doesn’t have to be large but there can be anything up to twenty times as many bees in such an environment compared to a cultivated garden.

You don’t have to transform the whole of your garden into a haven for bees, but every little effort will be appreciated by these essential insects as well as other pollinators, and that can only be good for the everyone.

When growing flowers from seed make sure that they haven't been treated neonicotinoids, this won't be on the label so you might need to do some research. Some seed packets will carry the RHS 'Perfect For Pollinators' logo, and bio-degradable neonicotinoid free wild flower seed mats are also available that just need to be laid out on prepared soil.

How Can I Help To Save Bees?

Although the man in the street can only show their disapproval of intensive mono-culture farming techniques and the use of pesticides by adding their voice to popular opinion and buying organically grown food, there is much more gardeners can do to encourage bees.

Many people have bird boxes in their garden, even hedgehog homes and squirrel feeders. To attract bees there are a large variety of artificial habitats that are sturdily built and easy to locate. Usually containing a series of hollow tubes, they offer a safe place to lay eggs and a haven over winter for solitary species.

Garden organically. If you must use a pesticide, make sure they do not contain neonicotinoids, if you see thiacloprid or acetamiprid on the label don't buy the product. You may still have products containing imidacloprid, clothianidin and thiamethoxam in your greenhouse or shed, these are completely banned and you will have to visit a household waste recycling site that accepts chemicals for responsible disposal.

Perhaps you can find a local beekeeping enthusiast who is willing to locate a hive in your garden or, even better become a beekeeper yourself, the British Beekeeping Association will give you all the advice that you need, 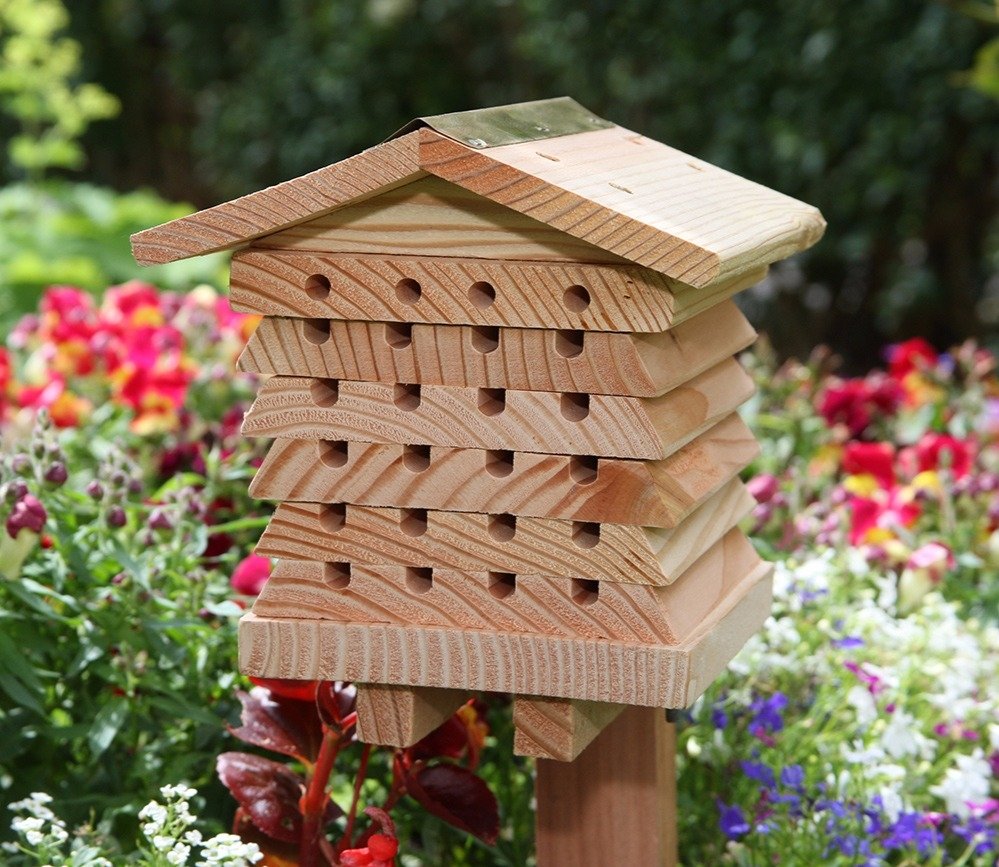 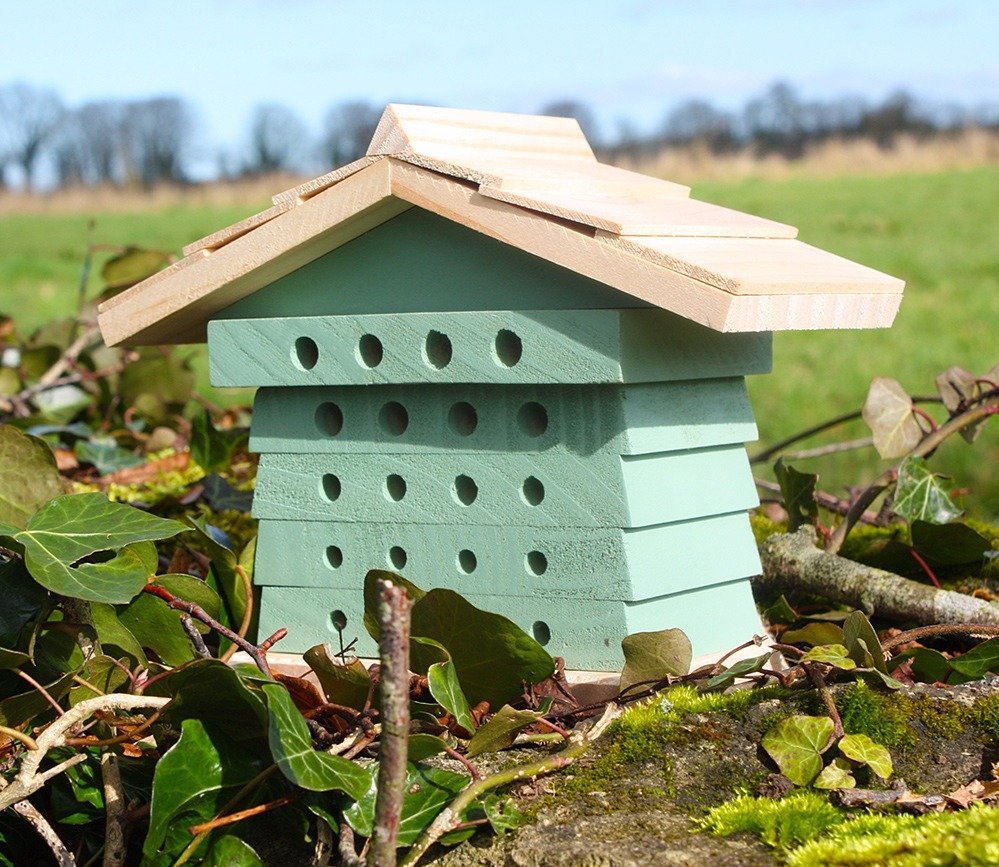 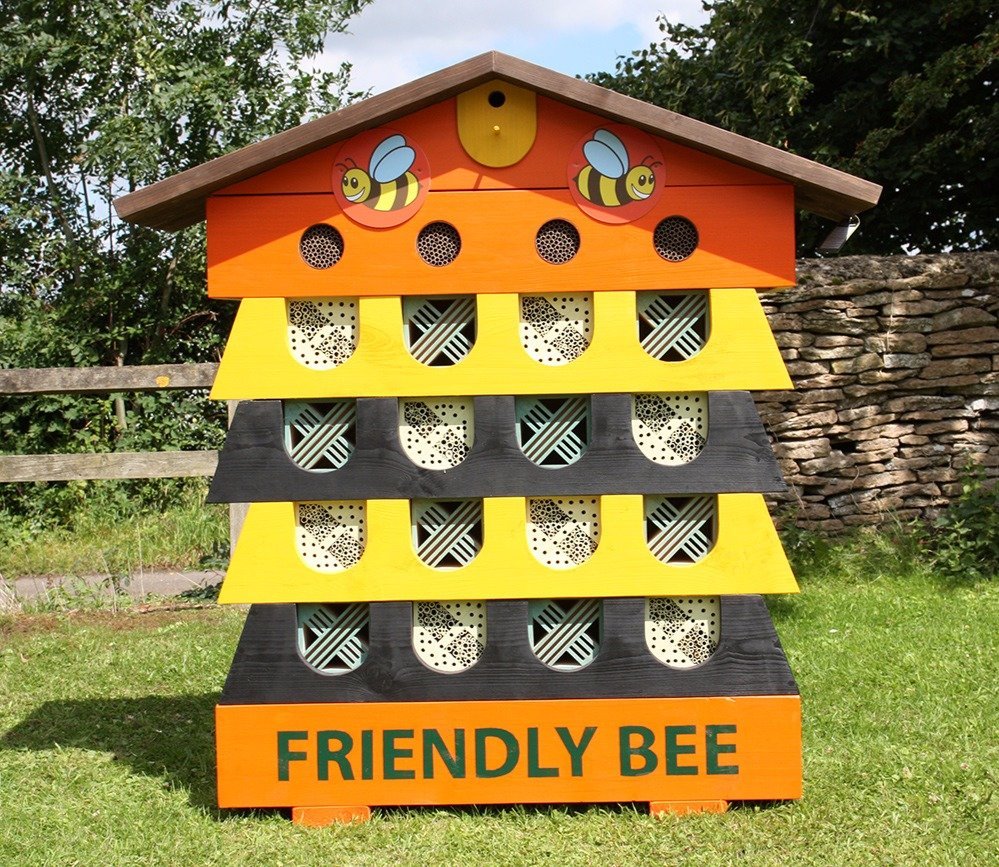