After considering all the alternatives, we chose a Sally Hen House to replace our existing elderly and rickety coop that was proving increasingly unfit for chicken habitation. Assembling the house proved to be a straight forward process and here's how we built the hen's very own Cluckingham Palace. 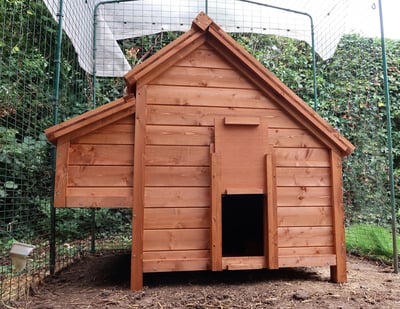 Written by Martyn Loach - Editor in Chief
Published on Thursday, 16th of September, 2021.

There were several reasons for the choice of this particular hen house. It has an eye catching appearance with an attractive pitched roof, robustly constructed to order in the UK. there's plenty of interior space, the nesting box is generously sized, and it promised to be easy to clean with a large lift out side panel.

We weren't disappointed but the hen house had first to be assembled after arriving in two substantial boxes on a wooden pallet. Our gravel drive rendered the trolley, on which the boxes are delivered, immobile - so the heavy packages had to be manhandled with difficulty into the back garden.

After opening the boxes, all the contents were in good order and clearly very good quality. Unlike many flat packs, there is no list of contents but you can look through the instruction booklet to get an idea of what should be there and everything seemed to be present. One criticism though would be the huge amount of plastic wrapping which couldn't be recycled and consequently ended up in the bin.

There are no written instructions but the drawings are quite clear. Sometimes you need to have a particular mind set to understand even simple diagrams, a little patience also usually comes in handy, but I found them easy enough to follow with only the occasional need for a head scratching tea break.

Much of the hen house is prefabricated and there are less parts than I imagined which makes assembly quicker and easier. It would help if the parts were numbered but finding the correct one is not difficult if you take the trouble to lay them out and they can be quickly fixed firmly into place with the 2” screws that are provided.

Although the individual parts aren't excessively heavy and pilot holes are drilled, assembly is definitely a two person job. The front and rear are unwieldy due to their shape and having someone to ensure everything is perfectly square and holding the parts tight while they are screwed together is essential.

The hen house quickly took shape, first the sides and floor, then the ends are secured followed by the roof. The only major problem was fitting the hinged nesting box top which, if the screws were correctly positioned, would not open. This might be a manufacturing or design fault, or perhaps our incompetence, but was solved by only using one screw and it now opens perfectly well.

Overall, assembly was uncomplicated, and all you need is a screwdriver. Most of the pieces fitted together without too much effort, the weather resistant tongue & groove timber is excellent quality (14mm thick), the panel flooring is strong (9mm) and there's a drop down predator resistant pop hole. Roofing felt can encourage pests, so I was pleased to see that this wasn't required as the pitched roof will very effectively deflect any rainfall.

A perch is included and the hen house's traditional appearance is pleasing to the eye. Chickens are hard to read but I would say that after an initial settling in period they will find their new house to be a spacious residence that is sturdily built, well appointed and takes only a couple of hours to assemble.