The GIMA (Garden Industry Manufacturers Association) annual awards recognise excellence in new products, marketing and export success and they attract entrants from all of the leading manufacturers. GardenSite Partner, Robert Hall, was elected to be part of the judging panel in 2017.

Written by David Coton - Partner at GardenSite
Published on Friday, 31st of March, 2017.

To judge the award, Robert used all the experience he has gained from working in the industry since the 1960s as a schoolboy. He joined the family firm (Hall's Garden Supplies) in 1979, the business was established by his late father Gerald in 1952 and was deemed to be one of the first garden centres of its kind.

Over the years Robert has seen many changes within the industry and was well placed to evaluate new and innovative products that he feels will benefit the consumer as well as the industry as a whole.

He expressed surprise at being asked to be a judge, “I received the invitation from Vicky Nuttall (GIMA Director) way back in January to be a judge at the GIMA Awards 2017. I was honoured to be asked as I well know that these are the leading industry awards for the manufacturers in our industry so I was very happy to accept.”

Robert added "My experience keeps my expectations grounded but I am always looking forwards as innovative new products within the industry are the life blood for its future and I fully expect to find some products that meet that criteria. Due to Brexit this year has to be as important as any to showcase our industry, not only at home but in Europe and even further afield.” 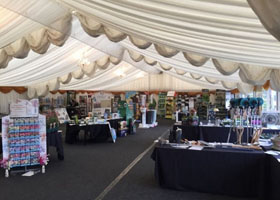 The judging took place at Warwick Racecourse, a venue that is ideally suited both for its central location (one judge flew down from Scotland and back on the day) and the available space needed both indoors and outdoors to properly display all the entries.

It was obvious right from the start that many manufacturers had entered the best of their new products as the large display hall was full and outside was a range of the larger products including structures, garden furniture, paving and even a very large van that had been especially customised to showcase the manufacturer’s goods that could be driven anywhere.

Let's leave it to Robert to explain how the judges set about their business and what happened on the awards night.

Vicky went through the judging process for each category which were clearly identified and each judge had to choose his or her top 5 entries and give a brief description of why we had chosen our individual winning nomination from each category. The judges were encouraged to discuss the relevant merits of the entries but each judge made his or her decisions independently.

Each of the entries had a full A4 page written description about the product so there was plenty to absorb. It was also obvious that a lot of thought and preparation had gone into this written presentation as everyone wanted to be a winner. Once the judging was under way there was no communication from any of the GIMA organisers who left the room with the exception of Vicky who was available only if guidance was needed. 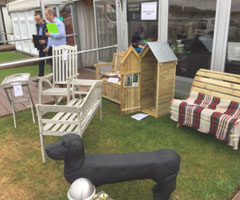 After each section had been judged all the results were handed back in and taken away to be collated. I was impressed by the procedure and the complete impartiality which was very necessary for the integrity of the awards.

Once the individual categories had all been judged the winners were all presented to us to select the overall winner for the Sword of Excellence. The debate was fairly intense as there was no immediate unanimous winner but eventually, a show of hands produced a majority in favour of one winner.

There were 9 judges that were purposely made up from a really good cross section of our industry. One or two had judged previously but for the majority, it was their first time.

When I go to a trade show, I will always try to focus on new products but inevitably I will spend time with current suppliers which is also important. But at the GIMA judging only the products and the accompanying literature speak to you so it's refreshing to look without any prejudice at the products entered. It's also pleasing to see so many less well-known brands competing and he came across some brands and products that he had never heard of or seen before.

Here is a full list of the judges and categories: 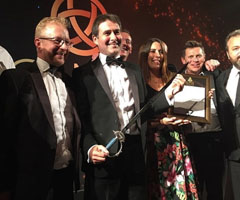 The accolades were awarded at the annual GIMA Dinner at Celtic Manor where I was delighted to present Westland Horticulture with an award for Best Consumer Product Packaging for their product Westland SafeLawn, this also went on to win the top award, the GIMA Sword of Excellence.

I was drawn to the product almost as soon as the judging had begun. The colour and shape of the box drew me in but the name hit the hardest. ‘SafeLawn’. This is immediately qualified by ‘Child & Pet Friendly’ above and ‘Natural Lawn Feed’ below the brand name.

Your eyes roll down to the four white plant labels pushed into the green lawn that further reinforce the message by telling you 100% natural ingredients will green and thicken your lawn as well as preventing weeds and moss naturally. And all this is achieved by using the cleverly built in applicator so everything is in the box and there is nothing extra you have to buy.

My early college years taught me how to be a journalist first before this was overtaken with my desire to be a photographer. Visual imagery is one of my great passions and so I was quickly drawn back to the top half of the packaging that has the sun shining behind the manufacturer's logo, which is not too overpowering, set against a blue sky background with a hint of thin white cloud. 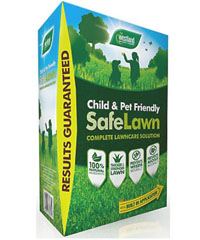 It’s a dream like English summer's day that wraps around the Janet and John style silhouette of a young girl and her family dog. Her feet and the dog's paws are purposely just lost in the lush green of the lawn. The silhouetted figures are particularly strong as they have no race, no creed and no religion but they appeal to everyman as they need our protection. It is very easy to subliminally project your child or grandchild onto the silhouette along with the family pet, whatever it may be. There is a fence behind them that underlines their vulnerability but also serves to protect them.

And finally, the life giving sun that is hidden behind the logo reappears in the girl's hand as a yellow tennis ball that connects her to her dog and adds the necessary fun of play time. The ball is the only element of colour in the silhouettes and it works superbly well.

I don’t think that most buyers of SafeLawn will read into the packaging what I have described above but I think they will be reassured enough by the product to buy it if they are in the market for a lawn feed and weed. I would also love to talk to the person, or group, who designed this whole graphic to see if I have read it as they have designed it?

The attention to detail also stretches to the shape of the box that has a linear indent running along one side which draws you to pick it up lengthways as the shape allows your hand to gently curve around the box. Facing the ground, or in this case facing the lawn, is the in-built applicator that is exposed by removing a protective strip of cardboard. Once you have bought the product it must be used and here you get all the encouragement any designer could muster from a simple cardboard box.

In truth this whole packaging format is anything but simple, even though it appears so.

I was a strong advocate for this product when judging it initially as a category winner and then again as the product to win the overall GIMA Sword of Excellence 2017. Congratulations to all those involved!

What’s The Noise All About?

There were other winners that I particularly liked including the Forest Decibel Noise Reduction Panel which was the Winner of the Garden Landscaping category. As the MC said on the night, “It just looks like any other fence panel - what’s the difference?” But that's the point.

It looks attractive enough, is very strong, and well constructed so it fits very neatly into the tick box that says ‘high quality fence panel’ without question. But it is the noise reduction element that is the really innovative element. There are similar products on the market but Forest Garden have managed to produce this panel at a realistic price so it will be affordable to buy in quantity for those that will really benefit from its sound deadening properties.

It works in three different ways by reflecting sound which easily bounces off the panel; it diffuses noise as sound waves break up when hitting the specially formulated triangulated surface and it absorbs and dissipates sound making it capable of up to 30dB Noise Decibel Reduction. Such an innovative product that can have a real benefit on people’s lives definitely gets my vote.

Put Your Hands Together Please

Perhaps the biggest cheer on the night came when it was announced that the Cast Iron Poppy Bird Feeder and charity Wild Bird Seed Blend from Gardman Products had helped to raise £240,000.00 for the Royal British Legion Poppy Appeal. The feeder is a very simple and attractive product selling for well under £10.00 that raised a staggering amount of money from the British public. Another very worthy category winner.

An All Round Superb Effort

There were many other worthy winners on the night but I have chosen to highlight some of the very best products that make the manufacturers in the gardening industry stand out from the competition.

Thank you to all those that entered, which was more than ever before, and thank you to Chris Ramsden and Vicky Nuttall for organizing such a professional GIMA Awards night. Hopefully I will be invited back one day so I can again have the opportunity to showcase some of the talented people, and the products that they bring to the UK gardening market.