What To Do In The Garden In April

With warmer weather arriving, this is the best time of the year to be stocking up on bedding plants to fill planters, borders and hanging baskets. Our garden centre becomes noticeably busier and the number of jobs that need to be done around the garden begins to accelerate. David Coton has these suggestions to keep you occupied.

You might be catching up on tasks that have been put back due to the cold weather but now is really the time to sow the seeds for a successful growing season.

After being left for about six weeks to replenish their energy, spring bulbs can be deadheaded when the foliage starts to turn yellow, removing the stem at the base. Remember in the autumn to extend the display by choosing varieties with different flowering times.

Cut back perennials that have provided wildlife with food and shelter over winter, particularly late flowering varieties such as asters, montbretia and sedums. Both bulbs and perennials can be split to widen their spread and introduce fresh young growth. Any perennials bought from the garden centres should be re-potted in larger pots before planting out next month.

Dogwood should be cut back every two to three years to encourage vigorous growth and better colour. Cut back geraniums that have been overwintering in the greenhouse to give them better shape. Remove broken and dying fern fronds. If you didn't do it last autumn, trim lavender into shape. Cut all the old growth around ferns back to the knuckle.

Prune mop head hydrangeas, cutting off last year's flowers and cutting about a third of the shoots back to two buds, remove any crossing or damaged stems. Prune early flowering shrubs such as winter honeysuckle after flowering, new growth will carry next year's flowers. At the end of the month when camellias have finished flowering, prune them back, refresh with a magnesium rich feed, mulch and move to a shady location to keep their roots cool.

Cut away the centre of gooseberries to introduce light. Red and white currants can also be cut back by about a quarter and any crossing branches removed to form an open structure. Cut brambles back to the ground before they become too invasive. Woody herbs such as thyme and sage can be cut back to bring on new growth. 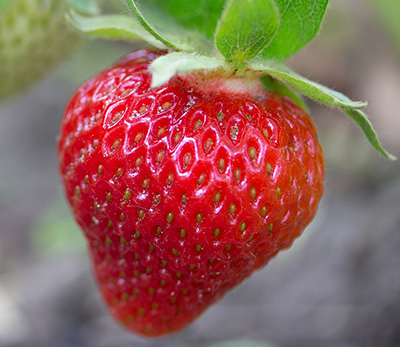 Garlic, shallots, onions can all be planted. Fit cauliflower and cabbage rings to prevent cabbage root fly laying their eggs in the adjacent soil. Cover leeks and onions with fleece to discourage onion fly and leek moths.

Chilly nights will inhibit seed germination, so cover seed beds with a fleece or cloche to add a few degrees to overnight temperatures.

Strawberries thrive in sunny, well drained soil with a pH of 6 – 6.5. Bare root runners can be planted in April but shouldn't be allowed to fruit until the following year. For existing strawberry plants, open up cloches to ventilate and also to allow in pollinating insects.

When the soil has warmed sufficiently and it hasn't been too wet, Sweet Peas can be planted out after hardening in a cold frame. Place 2-3 seedlings next to a support about 10ins apart in soil that has had lots of organic matter incorporated. To encourage bushy growth with lots of flower producing side shoots pinch out the growing shoot when 4 sets of leaves have formed.

Plant lilies in large pots using light compost, leaf mould would be good to add as well, Water weekly and then move to a final position in June after flower stems appear.

Take delphinium cuttings from below soil level, one or two from each root. Take off the top foliage and place into pot filled with gritty compost. Water and keep in a warm position.

Make sure that any frames that climbers are trained over are still secure before the climber begins to grow again.

Tall perennials such as delphiniums and peonies will need propping up, the most naturalistic way of doing this is to use long fairly sturdy twigs. Positioned early in the season the plants will soon cover them and they largely disappear from view.

When ornamental grasses show signs of growth it is time to divide them with a spade and replant.

Sow biennials such as Wallflowers, Sweet William and Canterbury Bells, Spread the seeds onto moist compost in a seed tray and lightly cover. Place away from direct sun in a warm position (17°–19°C). After potting on, the seedlings will be ready to plant out in the autumn, or you can plant seedlings directly and move them to a final position later on in the year.

The temperature needs to be at least 7°C when hardy annuals such as Californian poppies, cornflowers, love-in-a-mist, marigolds can been sown directly into the soil in shallow seed drills or patches that will benefit from an infusion of colour. Thin out when they are large enough to handle. Alternatively grow in a seed tray and then plant out.

After chitting, early and main crop seed potatoes should go into the ground with well rotted manure or other organic matter by the end of the month. Dig a trench 9ins deep and plant earlies about1ft apart (the rows should be 2ft apart) and main crop potatoes about 15ins apart with 2½ft in between the rows.

To grow potatoes in pots, take a large (at least 60cm) pot and quarter fill it with potting compost. Place seed potatoes on top and cover with more compost. Keep in a bright, sheltered, spot protected from frost. Add more compost as the potatoes grow, stopping when the level reaches 40cm from the top. Water freely and add fertilizer each week. The tubers will be ready after the flowers begin to open.

On the vegetable patch, dig in green manure to improve structure and add nutrients. Rhubarb can be lifted until mid-July, remember to pull the storks off, cutting may lead to infection. It's also not too late to sow parsnips. 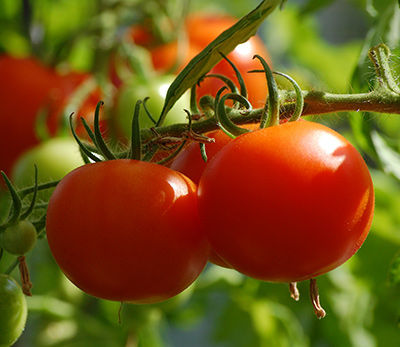 Once the vine tomato plants that you sowed last month have thee pairs of leaves, transfer to 3 inch pots and harden off when the first flowers appear. Then move outside, grow bags in full sun are a preferred location. Water regularly and use a high potash feed fortnightly. Remove all the leaf joint side shoots and the growing tip when there are five trusses.

Cucumbers can successfully grow outdoors even during an English summer. Pop two seeds into a 3in pot, the temperature needs to be roughly 18°C. Select the healthiest seedlings, which should have two – three leaves, and plant in rich, fertile rich soil (about 6 pH) 18-24ins apart or in a grow bag. Cover with fleece if the nights are still cold. Grow up a bamboo cane wigwam of trellis, pinching out when they reach the top. Keep watering well and every 14 days apply a tomato fertilizer.

If the weather is unseasonably hot, don't forget to shade the greenhouse and increase ventilation. Blinds or shading paint that can be applied and easily rubbed off will combat direct sun. If you are buying a greenhouse, ensure that louvre windows are fitted at ground level to achieve the best air circulation. Automatic vents that are temperature controlled are useful particularly if you spend time away from home.

It's time for a feed when new growth appears on citrus plants that have overwintered in the greenhouse. Apply either a normal tomato feed or diluted liquid seaweed. Don't over feed as you won't want to encourage too much of the sappy growth that aphids love. Give the plant a good soaking and then feed every 10-14 days increasing to weekly in the summer.

With the unpredictability of the seasons it is worth investing in water butts that can be fitted to your greenhouse or domestic guttering collecting rainwater that would normally go down the drain. An added bonus is that your plants prefer rainwater to the tap variety. 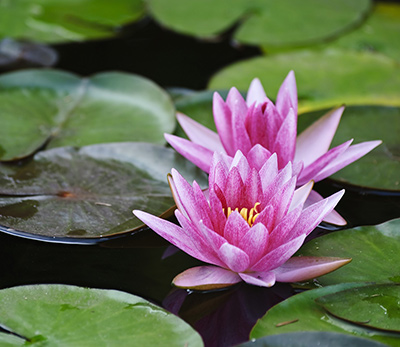 With rising water temperature and kinder weather, April is a good month for pond maintenance and particularly looking after established plants as well as introducing new ones.

If you didn’t get a chance during March, you should divide any overcrowded pond plants such as marginals and cut back oxygenators.

When the water temperature has warmed it's a good time to introduce, replant and refresh water lilies. Larger aquatic plants will really benefit from a slow release tablet food. I've used Lily Grow in the past which is a pond plant fertilizer and its much needed nutrients are sure to promote healthy growth.

Take the opportunity to locate new marginal plants in shallow water, Marsh Marigold or Water Forget-Me-Not are favourites. This will give them time to establish before any fish are added.

Blanket Weed, a hair like stringy algae, and Duckweed, with its thousands of tiny leaves, need to be tackled earlier rather than later. Try and remove as much as you can and then use one of the many water treatments that are on the market. Other problems, Green Water comes to mind, can also be treated.

Which? Highlights The Dangers Of Cheap Christmas Lights

Buying cheap Christmas tree lights from an online auction site, rather from a trusted retailer such as GardenSite, might seem a good idea at the time but you will probably change your mind after reading a recent report from Which?

Written by Martyn Loach.
Published on Tuesday, 17th of December, 2019.

GardenSite were once again pleased to support the Boldmere Community Festival which took place on 18 November, with the Christmas Lights switched on by Alan Gardner, well known for his appearances as TV's Autistic Gardener.

Written by David Coton.
Published on Friday, 23rd of November, 2018.

What Do I Need For A Great Halloween Garden Party?

You can create the spookiest Halloween Party in town with a spine chilling cast of para-normal misfits including ghosts, ghouls, zombies, vampires and many other sinister characters who inhabit the dark side. David Coton tells you how to transform your home and garden into a thoroughly scary experience.

Written by David Coton.
Published on Wednesday, 10th of October, 2018.

What To Do In The Garden In March

No-one can say our weather is predictable but what can be foreseen is that a huge amount of new stock is being delivered to our Garden Centre to celebrate the end of lockdown and the arrival of spring which officially starts on the 20th March,

Written by David Coton.
Published on Tuesday, 27th of February, 2018.

What To Do In The Garden In February

We will be receiving new stock at the garden centre during February in readiness for spring which hopefully is just around the corner, in the meantime David Coton suggests the jobs you should be tackling in the garden this month.

Written by David Coton.
Published on Monday, 29th of January, 2018.

When market leaders Halls introduced the ground breaking Qube greenhouse we promised to keep you in touch with any further developments. We can now share with you the details of their product range that has been re-branded for 2021.

Written by David Coton.
Published on Wednesday, 20th of January, 2021.

Outdoor Cooking In 2021 With A Napoleon Grill And Kitchen

Clouds usually have a silver lining and, as we slowly but surely start to live normal lives again, our taste for preparing succulent meals in our own outdoor space will be satisfied by a new range of barbecues and modular kitchens from market leaders Napoleon.

Written by David Coton.
Published on Monday, 21st of December, 2020.