How To Deter Foxes In Your Garden

Foxes are no strangers to modern back gardens, but they aren't welcome everywhere, especially if you discover the contents of the bin scattered around your outside space. Here David Hall offers advice on how to deter these nocturnal visitors..

Every so often a fox hits the headlines by gaining entry to a house and gets the nation talking about the merits of this beautiful but sometimes controversial animal.

Some say that foxes are a menace that needs to be controlled as they can live under sheds, make awful noises during the night, foul the lawn, dig up plants and turn over bins before eating the contents.

However, others blame humans for encouraging these animals to make the urban environment their home, by leaving out food and destroying hedgerows in the countryside where they normally live and forage.

How to Discourage Foxes

There are several ways you can discourage foxes from coming on to your property by:

There are several products to deter foxes that can be obtained online or from a garden centre, they work by confusing the animal's sense of taste and smell and is effective against cats, dogs and rabbits as well as foxes. Other products, including several cat repellents, can be seen here. 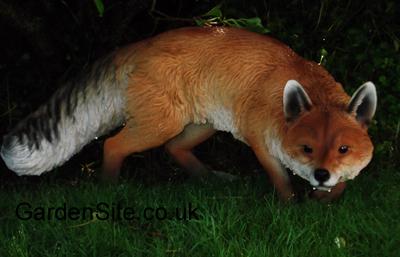 Recently we received an email from a customer in Glasgow who had purchased a highly detailed Vivid Arts life sized fox that she put in her garden. As a result the local fox was discouraged.

"...it is now in the garden in the pouring rain and looks SO!! realistic, so much so, that at lunch time our resident fox appeared and obviously thought it was real, he circled and arched his back at the ornamental fox, but was not brave enough to approach...". Dilys from Glasgow

There are baby fox and full grown versions available.

Making cat, bird or other food unavailable to foxes will make a garden less attractive, and by using fertilizers that do not contain fish, bone or blood products will stop foxes from digging in flowerbeds or lawns in search of a non-existent carcass.

Foxes Under Your Shed

If there is a den under your shed, just soak some rags or straw with a deterrent such as Cat A Pult and loosely block all the holes, which are the entrances to the den.

Do not block the holes with bricks as this will prevent the female from getting to the cubs and they will starve to death. Each morning replace the rags and straw in the hole. Once the rags or straw have not been moved for a couple of days, there will be no foxes left under your shed and you can permanently block the holes.

Keeping Rabbits In The Garden

Rabbits make great pets, they are fun to have around, not difficult to keep and appeal to all ages. There are plenty of breeds to choose from, each with their own characteristics such as size, colour and temperament. Whichever you prefer, the perfect place to keep them is in the garden.

Written by Lauren Bilboe.
Published on Thursday, 10th of May, 2018.

How To Attract Wildlife To Your Garden

In order to promote and enhance biodiversity and conservation of our wildlife, there's a selection of habitats and boxes you can purchase that are specifically designed to attract various small animals and insects to your garden. Here we look at some of the products available which also make unusual and very engaging gifts.

Written by Lauren Bilboe.
Published on Monday, 23rd of April, 2018.

What To Do In The Garden In July

With such changeable weather recently with a heat wave following by rain, David Coton is looking forward to summer finally arriving and a chance to get out into the garden, here are some of the jobs he'll be tackling during July.

There's no doubt that television provides gardeners with inspiration, sound advice and good ideas, that's why we're all looking forward to new programmes and the return of old favourites during 2020 but during the current government restrictions don't be surprised to see repeats filling gaps in a depleted schedule and other programmes adopting a different format..

What To Do In The Garden in June

At this time of the year you'll find a fabulous selection of summer bedding at our newly re-opened Garden Centre in Birmingham. Plant the bedding out in borders and containers this month to achieve a wonderful display of colour and here are some other jobs to do in the garden in June.

Garden Centres to Open on Wednesday 13th May 2020