Call it whatever you wish, Robert Hall says that the Miniature Fuji Cherry or Prunus incisa Kojo no-mai, is a superb flowering miniature cherry tree.

A beautiful hardy shrub that has everything going for it, except one thing. Nobody has ever heard of it

Consulting an advertising agency could do wonders for its image, raising consumer awareness and increasing demand. But I don't think we'll bother. One of the great appeals of gardening is discovery, so we'll keep this one a secret

Descended from the mountainous Fuji Cherry of Japan, this miniature form has it all, and more

When Does the Kojo Cherry Flower?

Shrunk to just 12ins makes it the ideal size to go into the garden centres, but in your care, it will eventually reach 4-5ft tall and 3ft wide. You will normally find the Kojo Cherry on sale early in the year, probably from mid-February onwards because it flowers so early. Depending on the weather, and where you live in the UK you can expect to see early flowers from mid-March onwards. By the end of April, the show will be over but don't let that put you off buying one after Spring.

The plant you buy in late spring through to autumn will have a chance to get properly established in your garden before winter sets in, and it will have put on a little extra growth which means you will have a larger plant in your garden than if you wait for the following spring selection. And you will probably pay more next season into the bargain.

It's newly found zig-zag shaped branches not only give it a striking winter shape but make it a very busy looking plant, that actually goes nowhere quickly.

It is ideal as a specimen for a pot, or even to plant up and bonsai.

Frozen with a glistening haw frost, its cracked icy fingers make a spectacular sight on a cold clear winter's morning. 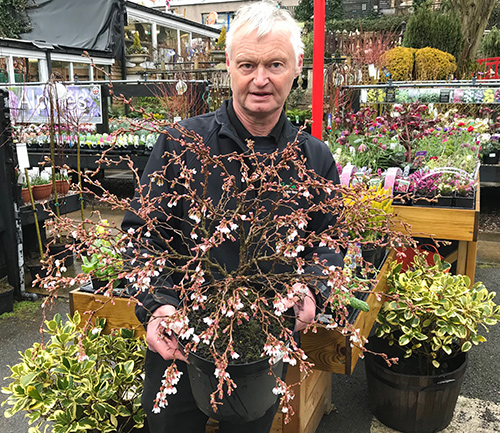 The early spring thaw that creeps on, as we move nearer to Spring, heralds a new dawn in the year of the Kojo.

The Flowers are the Stars on the Miniature Fuji Cherry

Wreaths of small pink buds swell over the naked twiggy branches opening to delicate snow-white pocket handkerchief blooms. The flowers are quite simple and you can not say they are large but as with floribunda roses, there are plenty of them to put on a great show. As the flowers appear on the branches before any foliage they are the star attraction, and not hidden behind any other distraction. The cherry blossom is the icing on the cake, make no mistake, but there is more to come.

Quote: "The significance of the cherry blossom tree in Japanese culture goes back hundreds of years. In their country, the cherry blossom represents the fragility and the beauty of life. It's a reminder that life is almost overwhelmingly beautiful but that it is also tragically short." Homaro Cantu - American Inventor

The Miniature Kojo Cherry Holds the Interest All Year Round

Fresh foliage unfurls over the frame to finally clothe the shrub in spring green. Slowly deepening in colour during the heat of summer as the temperature's rise.

This finally draws an autumnal flush of reds and gold to the leaves before the cold winds and rain strip the Kojo naked.

The cycle starts again, but it's always better the next time around.

GardenSite Donates Prize To Grow Your Own Picnic

As part of a project designed to sow ideas, grow inspiration and cultivate futures, 300 London schools are growing their own picnic this summer and their reward could be a £500 voucher from GardenSite.

Take Your Own Plant Cuttings

Propagating by taking cuttings, whether from your own plants or ones you admire in neighbouring gardens, is a fantastic way of increasing the variety of plants in your own garden free of charge, and all you need are a sharp knife and patience.

What To Do In The Garden In May

With the recent hot weather encouraging everyone out into the garden and the threat of frost disappearing during May, David Coton is in no doubt that this is going to be a busy month.

What To Do In The Garden In October

It's autumn and David Coton is getting the garden prepared for the onset of colder weather but, at the same time, the arrival of spring bulbs in the garden centre is a reminder that we should also now be planning ahead for next year.

Written by David Coton.
Published on Monday, 2nd of October, 2017.

It was all change this year for GLEE, the garden retail industry's annual show that is usually held at the NEC in Birmingham. Due to pandemic restrictions, a virtual show took its place with product launches, presentations and awards all happening online.

Written by David Coton.
Published on Wednesday, 23rd of September, 2020.

After quizzing themselves with the question "How can we make better sheds?" Forest Garden have been busy over the last 12 months upgrading and improving their existing shed range so that they now offer higher quality, cost-effective and better designed sheds for every gardener. David Coton visited their factory last week, and here is what he discovered about the relaunched Better Shed range.

Written by David Coton.
Published on Monday, 14th of September, 2020.

What To Do In The Garden In September

Although the growing season is slowly coming to an end, David Coton can suggest quite a few jobs that need to be done over the next few weeks, helping you make the most of what's left of summer and preparing for the arrival of autumn.

Written by David Coton.
Published on Tuesday, 29th of August, 2017.

Our Challenges Through Covid-19 and What Our Customers Should Know

GardenSite's senior partner Robert Hall explains the actions we're taking in order to beat the challenges surrounding Covid-19 as well as handy information for customers who are still awaiting the delivery of their order during these unprecedented times.