The Eternal Summerhouse By Julian Bull

Requesting a greenhouse without glass is one of the more unusual inquiries that our Marketing Department has received, but it was all in the cause of art and we were pleased to help out local designer Julian Bull create his latest installation.

​Based in Feckenham near Redditch, Julian is self-taught and has a talent for exploring a range of themes using many different materials and techniques with an emphasis on the importance of composition and the effect of light.

Created for the Feckenham Flower and Garden Festival in Worcestershire, the Vitavia Jupiter greenhouse that we supplied has been transformed into 'The Eternal Summerhouse', whose striking appearance will certainly be noticed.

The bright silver aluminium frame has now been fitted with multi-coloured transparent acrylic glazing, with the result that the whole structure becomes in Julian's words 'a temple of colour' designed to put a smile on your face even if the weather is miserable.

As the sun moves over the greenhouse, long colourful shadows are cast through the multiple layers of acrylic, so the effect is forever changing and the interior becomes filled with different shapes of a vibrant spectrum.

The summerhouse's appearance also comes to life after dark when it is illuminated internally and its appearance is further re-worked at times when the panels are misted with morning dew or covered in frost during the winter. 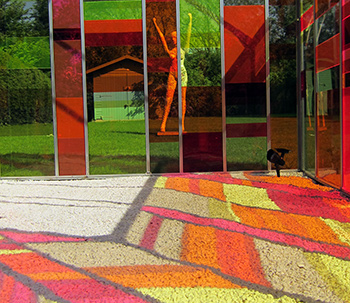 Now in its 33rd year, the festival takes place in Feckenham near Redditch on Saturday 19th and Sunday 20th May 2018. Approximately 30 gardens and the flower-filled 12th-century church are open to the public, and there's also a barbecue, plant and garden sale.

For his artwork, we supplied Julian with a Vitavia Jupiter 10ft x 8ft greenhouse, and further information about his work can be obtained from Julian Bull.

New products are the lifeblood of many industries and it’s no different in the gardening sector and most of us above a certain age will know the Rubbermaid brand well, particularly if you have ever been in the cleaning industry.

Written by Robert Hall.
Published on Monday, 16th of September, 2019.

GLEE is the garden retail industry's annual show at the NEC in Birmingham. David Coton took the opportunity to visit this year's event to catch up on the news, visit current/potential suppliers and evaluate new products we would like to offer on GardenSite in the coming year.

Written by David Coton.
Published on Thursday, 12th of September, 2019.

I had never heard of Evika Greenhouses but when I walked into our annual Garden & Leisure Exhibition 2019 (GLEE) it was the only product I really saw. A brand new greenhouse brand is always going to get my attention but the sense that this was not only new, but different, kept my focus.

Written by Robert Hall.
Published on Thursday, 12th of September, 2019.

A Sun Pent shed from Shedlands is a versatile garden structure that is full of light and can be used as both a workshop and potting shed. Martyn Loach recently invested in the 8ft x 6ft version and here is his review of the shed and its installation.

Written by Martyn Loach.
Published on Saturday, 20th of July, 2019.

There's no doubt that television provides gardeners with inspiration, sound advice and good ideas, that's why we're all looking forward to new programmes and the return of old favourites during 2020.

Which Gardening Magazine Should I Buy?

Gardening is such a popular activity with interest only increasing over recent years that the magazine rack in your local newsagent or supermarket is packed with publications offering inspiration and practical advice.

Written by Martyn Loach.
Published on Thursday, 19th of December, 2019.

What To Do In The Garden In January

Although the days are short and the view from our Garden Centre is dull and overcast, David Coton suggests various jobs that can be done in the garden during the month of January.

Written by David Coton.
Published on Friday, 29th of December, 2017.