Our Zombie Appears On The Paul O'Grady Show

Paul O'Grady is one of TV's best known presenters and, as he was celebrating the Chelsea Flower Show Week on his ITV daytime show, Nathan James Dodd thought he was just the person to receive our gift of a Zombie garden ornament.

Written by David Coton - Partner at GardenSite
Published on Monday, 19th of May, 2014.

His nightly teatime programme features celebrity chat but, on the night before the Chelsea Flower Show, the big names in entertainment were joined by a surprise guest, scarier than any celeb and with more personality than some of them.

We thought that Paul's show would be the perfect setting for one of our best selling ornaments.

But it wasn't a gnome or a nymph, it was something completely different and definitely not for the faint hearted.

The note with it said -

'Dear Paul, I thought I would send you something for your garden....From Nathan at GardenSite'.

And then, revealed in all its scary detail, was the Zombie of Montclaire Moors.

Grey as death, with frightening bulging eyes, this impressively realistic resin model was sure to send Paul's rather delicate mental state into a state of high anxiety.

If the thought of having the undead emerging from your flower bed seems like an acceptable idea to you, the Zombie of Montclaire Moors can be joined by other gruesome personalities captured in meticulous detail.

A Zombie for Everyone 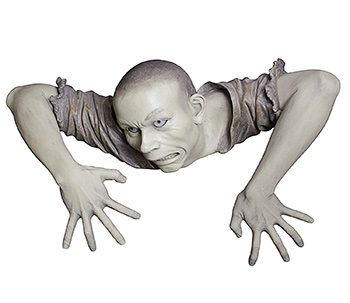 Various zombies, either whole or chosen parts, can inhabit the darkest recesses of your garden struggling to break free of the earth.

And for those who have sought refuge inside your house, surprise them with a monstrous bulging eyed harbinger of doom whose bloody head and hands will appear to have smashed through the lounge wall.

All great fun and produced superbly by Design Toscano, whose range includes much more traditional sculptures and ornaments if you are of a nervous disposition.