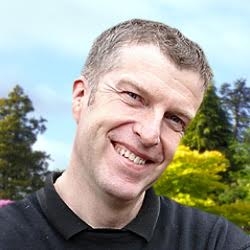 Simon has been an integral part of the team since 1984. He can easily turn his hand to anything, his artistry and brain power is legendary within the company. Simon heads our Christmas department and his displays draw in customers from far and wide. Simon loves his international travel but can also often be found hiking in the Bavarian alps. Coincidentally, this is always at the time of the October Beer Fest. Simon is expert on all of our garden furniture ranges especially Barlow Tyrie and is happy to answer any questions you may have.

We've been selling Barlow Tyrie furniture since the 1960s and so have had our fair share of experience with Barlow Tyrie's products, including the popular Equinox range. Simon shares his review of the Equinox garden furniture range for those interested in knowing a little more about this collection before purchasing.

Robert Hall, Senior Partner at GardenSite, had the pleasure of visiting Harrogate Christmas & Gift Fair on Sunday 12th January along with his wife Kay and business partner Simon Whitehead.

When you're an award winning furniture company, it's only natural to employ world renowned designers. Simon reports on a Barlow Tyrie appointment.

Barlow Tyrie are now known throughout the world as designers and manufacturers of high quality garden furniture made from top grade teak. Now fast approaching their centenary, they are still a family firm, run by direct descendants of the company's founder and have a fascinating history.

According to the Chinese zodiac, 2013 is the Year of the Snake. But don't be unduly concerned if you suffer from ophiophobia. Not a lot of people know what it is and Snakes aren't all bad anyway. Someone coming into the world this year might be cunning, quick to anger and possessive but they will excel at business and will always be able to provide for you.