TV shows regularly ask GardenSite for help in making programmes, and sometimes our customers also appear in them. That was the case recently when Channel 5's 'Dream Kitchens and Bathrooms' featured Akil and Samina Beckford who unusually wanted to turn their bathroom into a rain forest. 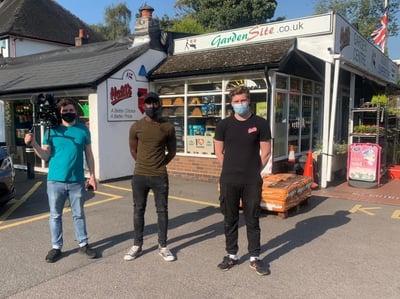 Written by Martyn Loach - Editor in Chief
Published on Thursday, 29th of April, 2021.

The local couple who have two children are regular visitors to our Sutton Coldfield Garden Centre and their rather intriguing request was for help to recreate a rain forest in their bathroom.

Akil and wife Samina have been refurbishing their home since they purchased it and initially it was several Instagram posts showing their progress that attracted the attention of Pi Productions.

The production company wanted unique renovation ideas for a new series they were making for Channel 5 and a rain forest themed bathroom was just what they were looking for.

As the presenter Mark Millar, a familiar face from 'DIY SOS' pointed out, although bathrooms are expensive, they sometimes get overlooked. This is unfortunate as they are extremely important in adding value to your property and are hard to get right.

Akil has a lifetime interest in nature, he's a professional aquarium designer who creates bespoke aquariums for both individuals and companies and is often seen in our garden centre's aquatics department.

He said 'To reproduce the rain forest lush tropical environment we needed to fill the bathroom with an abundance of plants and our first thought was to pay a visit to the garden centre.'

Species such as the tropical Castor Oil Plant would prove to be a perfect choice and Akil is pictured along with the film crew choosing other plants with the luxuriant appearance the couple wanted, to make their dream a reality.

By the end of the programme, viewers saw that together with other striking features such as a black ceiling and moss wall, all the plants that Akil chose were ideal to turn a suburban bathroom into a fabulous rain forest landscape.